Laura with Bun by Jaume Plensa - Tampa Museum of Art

Laura with Bun by Jaume Plensa 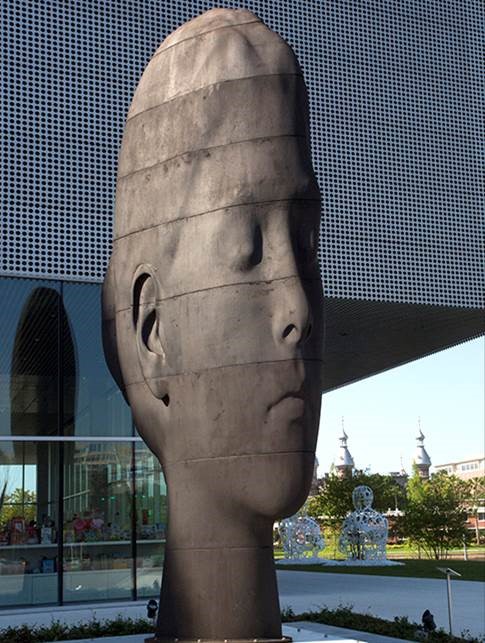 Jaume Plensa is an internationally acclaimed artist who has exhibited his sculptures in museums all over the world.  In locations as diverse as Seoul, Paris, Chicago, Bordeaux and London, Plensa’s monumental sculptures have reaffirmed the power of art to transform a public space into a community. This is aptly demonstrated in his first major commission in the United States, The Crown Fountain in Chicago’s Millennium Park (2004). Two 11-story LED towers face each other across a thin pool of water, with images of a changing and diverse city reflected in the water, a continuously cycling metaphor for the life of a city.

The Crown Fountain was the beginning of Plensa’s investigation of the portrait via photography and form. This led to works like Laura with Bun. At more than 23 feet tall, this artwork expresses both individual and universal traits at great scale, inviting viewers to consider multiple aspects of beauty and human nature. Like all of his large-scale female portrait heads, Laura has her eyes closed, as if looking within. In speaking about these works, Plensa has said, “Look into yourself. My piece is a mirror to reflect your image, so you can think about your own interior—how much beauty we have inside of ourselves.”

Laura with Bun initially came to Tampa as part of the 2016 exhibition Jaume Plensa: Human Landscape. Thanks to the generosity of an anonymous gift and the overwhelming popular support of nearly 100 donors, the Museum has committed to purchase the sculpture for our permanent collection.