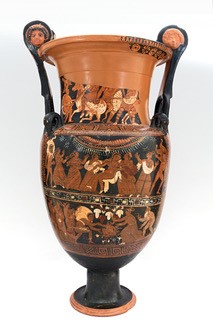 Join us for an Antiquities Circle lecture related to the exhibition, Life & Death in the Ancient World, presented by Dr. Robert Steven Bianchi.

The relationships between Dionysos and that of both his links with the earlier cult of Osiris and with his later associations with Christian theological tenets are often highly contested issues. The arguments in favor of supporting such connective tissues often rely solely upon visual representations which seemingly support the premise. This fully illustrated lecture, after reviewing such positions, calls into question the validity of the exclusive use of art historical data in an effort to define intercultural connections. The lecture then passes in review the relevant literary sources, which when considered in conjunction with the art historical evidence, casts the question of those relationships into a completely new light.

Dr. Robert Steven Bianchi is currently the chief curator of The Ancient Egyptian Museum Shibuya, a district of Tokyo, Japan. Widely traveled and extensively published with 388 journal articles and book reviews and 97 books appearing to date, he has already appeared as a principal in 120 television telecasts worldwide. He continues to collaborate on a number of academic publications with Branko van Oppen de Ruiter, our museum’s Richard E. Perry Curator of Greek and Roman Art. Over the years, Dr. Bob and his wife Anna have supported the TMA and have enriched its collections with the donation of several antiquities.

This lecture is sponsored by Charles Stanish & Garine Babian.

Image:
Grave-Marking Vase
with the Death of Semele; lower register: Birth of Dionysus